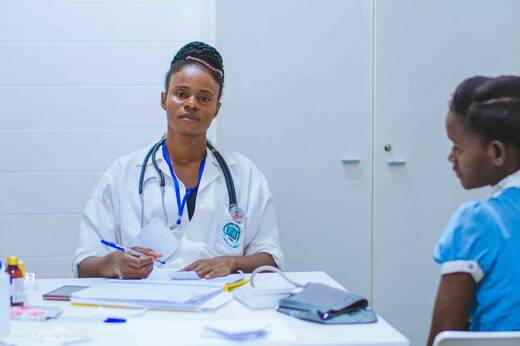 Our mission is to amplify stories to create lasting, positive change in health care. Every person’s experience is valid and valued. But that doesn’t mean every person has had equal opportunity to voice their experience or, when they do, be heard and understood by those in a position to take positive, broad-reaching action.

Black History Month is an opportunity to learn from the past, from inspirational leaders who have been champions of progress, but also from the injustices that have made that change necessary. It’s an opportunity for us to examine the effects of inequality and better understand how essential Black voices and Black experiences are to advancing health care.

As part of “The 1619 Project,” Evelynn Hammonds, a historian of science at Harvard, told Jeneen Interlandi of The New York Times: “There has never been any period in American history where the health of blacks was equal to that of whites. Disparity is built into the system.”

This disparity takes many different forms, some more malignant than others, but the long term result is that many Black Americans hold a deep, historical mistrust of the health care system that continues to influence their attitudes at a time when access to health care is more important than ever.

A lack of trust born from centuries of systemic mistreatment.

Understanding where this mistrust comes from is the first step to finding better ways to engage the Black community around its health needs, now and into the future. History is rife with examples of Black people being subjected to cruel and unethical treatment by medical professionals.

During the 1800’s, when slavery was still a legal institution in America, Black people were often used as unwilling or uninformed medical research subjects. Emancipation did not stop of this type of experimentation, as evidenced by the Tuskegee syphilis study, which began in 1932 and didn’t end until it was exposed in 1972.

The turn of another century did not result in a significant narrowing of the health care divide experienced by people of color; ethnic minorities continue to experience lower rates of health coverage, higher rates of chronic disease, and lower rates of critically needed medical intervention. After generations of disenfranchisement, it’s of little wonder why so many Black Americans mistrust the medical establishment.

So, have things changed during the pandemic? Not according to a new poll published by The Undefeated, in which fifty-five percent of African Americans said they do not trust the health care system.

When asked specifically about whether they trust doctors to do what is right for themselves and their community, only 59% of Black respondents said yes, compared to 78% of whites and 72% of Hispanics.

In our own research among the Health Stories Project community, those who identified as Black, Indigenous or a person of color (BIPOC) also reported lower levels of trust in their doctors: 70% of BIPOC respondents, versus 82% of white respondents.

A lack of access to reliable care and reliable information.

Even for those who are willing to put their trust in the system, access to care continues to be a greater problem for people of color. Data from a 2018 report showed that 20% of Black respondents did not have a usual source of care when needed, compared to 14% of whites.

When people are unable to access a care team who can provide sound medical advice, it leaves a vacuum that may be filled by information from less-reliable sources. This is especially worrisome during a time of extreme isolation that has people spending more time than ever on social media, which can be a breeding ground for misinformation. For people of color, who already have plenty of valid reasons to question information from the medical community, a situation like this can create doubt around potentially life-saving medical advice.

A lack of confidence in a system that needs to prove itself.

The negative impact this can have on health outcomes isn’t just theoretical at this point. Data from the CDC indicates that people from BIPOC communities are nearly three times more likely to be hospitalized due to a COVID-19 infection and twice as likely to die from that infection, compared to white, non-Hispanic people.

Yet, this increased vulnerability does not appear be changing how Black Americans perceive the health care system. When asked whether they would be willing to get a COVID-19 vaccine, if it were determined to be safe by scientists and offered for free, just 40% of Black respondents said they would – compared to 65% of white and 61% of Hispanic people asked the same question.

Some of our own preliminary data reinforces this finding: 27% of BIPOC respondents said they were “Not Very” or “Not at All” confident in the vaccine review process, compared to 18% of white respondents. A greater percentage of BIPOC respondents said they planned to wait at least 12 months before taking the vaccine, 38% versus 23% of white respondents. Although this information isn’t yet reportable as significant, it is aligning with the troubling public health reports released this January that minorities are not being vaccinated at the same rates as white America.

For the 26 states reporting vaccinations by race, Black people are being vaccinated at half the rate of whites as a percent of their Race/Ethnicity group receiving the vaccine. Parsing out how much of this is attributable to lack of trust versus lack of access or other variables is difficult, but the data indicates that white people have received a higher share of vaccinations compared to their share of cases and deaths and their share of the total population in most states reporting data.Whatever the reasons, one thing is clear: the health care system is still not effectively meeting the needs of Black Americans.

The past need not define the future.

So what can we do to improve things here, now, and moving forward?

We can start by recognizing that the mistrust many Black Americans feel towards medical professionals is rooted in a reasonably founded belief that they’re being given limited or inadequate information, particularly when it comes to medical research.

Establishing trust demands an acknowledgement of wrongs that have been committed historically, as well as the prejudiced behavior that all too many Black Americans continue to experience.

Lasting trust and better outcomes can only be founded on present actions, though, not just acknowledgments of the past. Immediate, purposeful steps must be taken to address the systemic inequalities that continue to impede Black Americans’ access to health care. We must also rethink our approach to broader societal issues that shape critical determinants of health, like educational resources and job opportunities.

This starts with listening and that’s why we will continue to engage with the Black community through an ongoing survey series that aims to better understand the effects of health inequity and identify the types of programs and resources best suited to make an immediate impact towards addressing it.

We are also redoubling our efforts to improve outreach strategies for engaging minority populations to ensure they are effectively represented in clinical trials.

This is no small endeavor but it’s one of the worthiest of our lifetimes. Black History Month may be ending soon, but this health crisis certainly is not. It’s essential that we recognize the urgency of the situation unfolding before us and seize the opportunity to change how this country meets the health needs of Black Americans.

Previous
All News
Next